A sold out show that opened Fest Salt Lake Stages 2020, the second year of the Kinky Beast Cabaret was even more mind-blowing than the first. Let me count the ways. There was a hitting scene that was more caring than a cuddle puddle. A sub-dom act that was a model of self-affirmation. A tender needle scene that felt like a slow-motion love affair. I could go on and on listing expressions of sex-positivity and acceptance that were onstage.

One newcomer– a patron at SB Dance performers who knew nothing about kink– couldn’t stop talking about the contrast with her preconceptions. “I thought Kink was about being bad” she said. “But I found out it’s about being good. Nasty good!”

It’s on to the New Creation for us now. Hopefully a blog during the process.

PS– A quick update on the last post about SB Dance being denied funding from the Salt Lake City Arts Council. The whole thing stunk enough that we made an open records request. Lo and behold, the records were filled with disturbing and unprofessional behavior on the part of the Arts Council review committee. SB Dance wrote a report about its findings, and it’s slowly making the rounds.

So what happened at the City? SB Dancers are kinda scratching our heads. Colleague organizations and other professionals are astonished. The new Division Director Felicia Baca, who I respect very much, stands by the reviewer’s decision. What else can she do in her first year as Director? The grant got a few comments about the narrative section being too general. But no feedback about budget or video samples or metrics. There wasn’t anything missing. Nothing like “SB Dance is fake art and they should just go back to their rat-infested studio and start again.” At the very least, you’d think that the City’s granting agency would be ready to justify such a radical opinion with some objective evidence. After all, how many professional arts nonprofits are there in Salt Lake? It’s not like this is the MacArthurs.

For what it’s worth, Salt Lake City Arts Council is itself kinda odd. Not without controversy, it is organized in part like a private nonprofit. It uses an idiosyncratic grant review process that is conducted by a subcommittee of Board Members, some of whom are not arts professionals. Also, the Salt Lake Arts Council recently went through a rough patch, effectively leaderless with an embattled Division Director and then no one in that post for several months. While the arrival of Ms. Baca is a breath of fresh air, the City Arts Council has some work to do before it can argue for a budget worthy of a capitol city. I think that argument just got weaker by making an unprecedented—and pretty much unsupported– decision to cease funding to one of just a handful of professional arts groups in Salt Lake.

It stings. It’s one less performer in the upcoming year. SB Dance has chugged through crap like this before. If this decision leaves you puzzled, and if you’re a Salt Lake City citizen, give your City Council Member a call or email. Let them know that there’s good weird and bad weird, and this City needs much more of the former, especially in the arts.

The team packed up The Pushers a couple of weeks ago. It was our deepest, juiciest and most polished production– an unpredictable narrative with funny and poignant moments, substantial physical innovation, unusual video projections, miraculous lighting that included state-of-the-art rovers, outstanding performances, and an onstage bar that made an intimate theater feel more intimate. END_OF_DOCUMENT_TOKEN_TO_BE_REPLACED

Mixing it up with theater-goers is an old old device that you can trace from Commedia Dell’arte to French Enlightenment salons to 60s protest theater to the current cool kid in school, a NYC smash called Sleep No More.  Once labeled “screwing around with the audience”, this contrivance has been re-branded as “immersive” theater. This October, SB Dance trots our horse out of the stable. It’s called All Saints Salon, known also by its endlessly entertaining (to me) acronym, and described as an adult treat for Halloween. END_OF_DOCUMENT_TOKEN_TO_BE_REPLACED 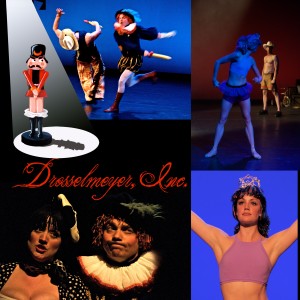 A turkey for your Thanksgiving pleasure…Drosselmeyer Inc (June 2009) told of the weird uncle from the Nutcracker and his unnatural relationship with his dolls Hamlet, Tex, Frenchie, and Tooth-Rot (aka, the Sugar Plum Fairy). Excellent performers and designers couldn’t pull this one out of a tailspin. A balletophile and established dipshit, the local dance critic wasn’t wrong to dislike it though she might have gone a little far to write that my future should be as “a dancer in someone else’s company.” Ouch. Thank God that failure is now acceptable in our creativity-worshiping culture.

Learn about what’s up and special, unpublicized events